During a meeting of the Clemson Arts Center Artists Guild in 2014 the idea of a store-front gallery where the work of the many talented local artists could sell their work became a topic of discussion. Sculptor Lou Koppel arranged a meeting of interested artists in the Clemson, Pendleton and Anderson areas and pulled together ideas and resources to begin to make this dream a reality. Lou and 12 enthusiastic artists signed on to form the Pendleton Square Artists Cooperative.

A small space was rented on the Square in Pendleton, next to the Village Bakery. The Art Gallery on Pendleton Square opened its doors in August of 2014 with a six-month lease and a cautious hope for success. Six months later, with a warm embrace from the local community, the cooperative signed another six-month lease and the Gallery was on its way.

In January of 2017, a car plowed into the exterior of the Gallery, punching a hole completely through the old brick wall and forcing the artists to empty out their artwork and close the Gallery’s doors. The Clemson Arts Center stepped in and offered gallery space for the following two months, allowing the cooperative the opportunity to stay in business while searching for a new home. In April of 2017 the Art Gallery on Pendleton Square re-opened its doors in its present location on the Square, doubling the amount of space and allowing many more artists the opportunity to sell their work in the local community.

To learn more about our artists and to see samples of their work, see our Artists page. 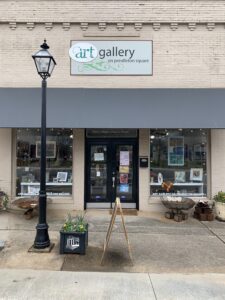